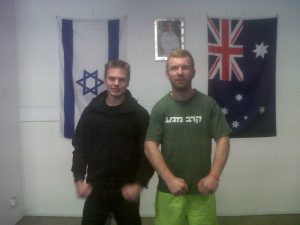 ISRAEL TRAINING CAMP 2020 Tel Aviv
Sunday, June 14, 2020 10:00 AM
Saturday, June 21, 2020 5:00 PM
Krav Maga practitioners of all levels will be flying into Israel from across the globe to to participate in the Krav Maga Combat Training Ron Engelmann Australia crew and camp.

This Combat Camp as a unique experience to train with the top Krav Maga Experts including Ron Engelman, IDF commander and founder of Krav Maga Defence Institute.

Training throughout the camp is held in different environments and locations including the beach, in water, in the forest.

Israeli martial art that aims to defend oneself in a dangerous situation and a threat:

We have a three-hour training program divided into two parts – educational and test.

The educational part discusses issues from the following sections:

– the perpetrator’s methods of action

– types of security measures limiting the risk of assault

The test part involves trainee’s knowledge of issues that were previously discussed in the education part. After passing the test, you can print the certificate and attach it to the personal file of the trainee.

The mentioned course is one of the few that is fully directed to civilian employees and persons responsible for ensuring safety: managers and managers.

The main issues raised during the course are: 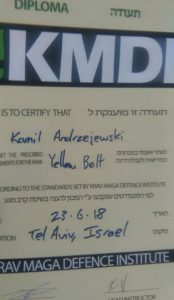